The Iridium satellites are a fleet of 66 communication satellites in low earth orbit. A feature of these satellites is that the antenna's can catch the sunlight and focus it in a beam down to the earth's surface, on a predictable track. This photo of Iridium-49 was caught unintentionally, but knowing the exact time and location of the photo, it was then possible to determine which Iridium satellite it was.

The ISS orbits the earth once every 90 minutes, and could theoretically be seen every day from any location on earth that is between latitudes of +/- 50 degrees.  However, the only time it is really observable is when it goes over the observers location either a few hours before sunrise, or a few hours after sunset. This happens several times a month. At this time, the earths surface will already dark, but at 400 kms altitude, the ISS will still in the sunlight.

It's been an objective of mine to get a good photo of the ISS when it passes over head. So far that hasn't happened, and the best photo I have got so far is the one below during December 2013. This one was obtained using a Nikon D800 and FSQ-85 direct connected, and using manual tracking. The resulting image was very small on the photo and lots of zooming to get it this large. The shutter speed was 1/60 sec which was probably too slow and it's likely that the image below has motion blur.

Hopefully, one day I will get a better photo! 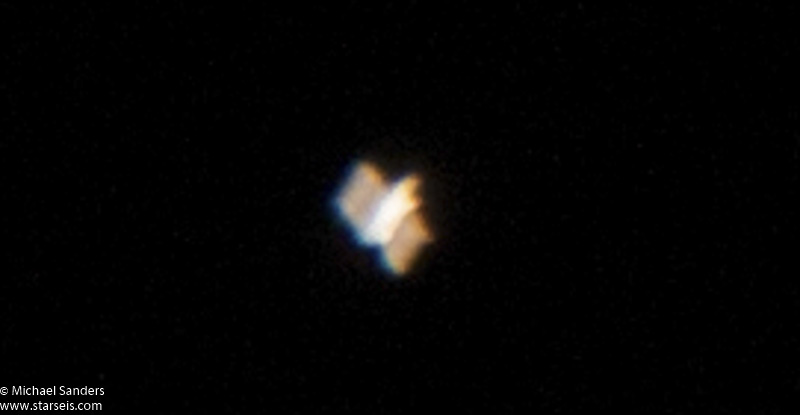